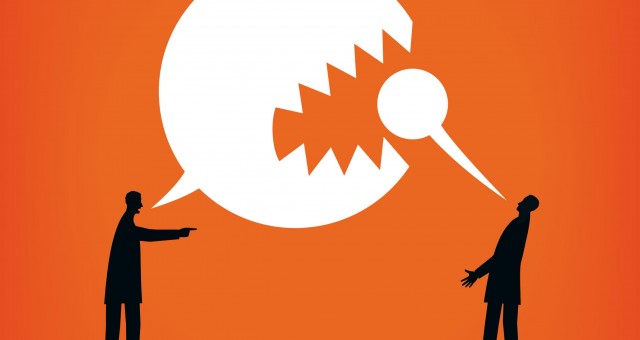 You can’t believe it’s come to this. The, otherwise, sensible person in front of you is defending an absurd position.  You can plainly see the issues they have failed to factor into their thinking but every time you raise one of them they become even more defensive about their opinion, more difficult to shift from their position.  And this doesn’t make any sense to you – surely once they are made aware of the things they are ignoring, the assumptions they have made that are plainly wrong, they will change their thinking?  And you know if you simply tell them to accept your position and get on with it, their heart won’t be in it and the result won’t be nearly as good as when they really believe in it.

All the research says the start of changing minds and “winning” arguments is by listening and understanding the other position.  Peter Bregman (HBR, May 2015) says the first step is silence.  Just let the other person talk.  Watch and listen not just to their words but to their feelings.  Silence can often cue you into the possibility that the person is angry or distressed about something else and their feelings are bubbling over into this topic perhaps because of a tangential connection.  So really, we are talking about actively listening not looking for a gap in the conversation to get your opinion in:

Bregman contends that people feeling they have been genuinely listened to, leads to a greater respect for the one listening and a greater receptiveness to that person’s opinion.

Another even more powerful way of changing minds seems to have been researched in Israel.  Taking people with apparently intractable positions on either side of the Israeli-Palestinian conflict, researchers applied what they called “paradoxical thinking”.  When the subject expressed a view, the researcher would agree with that view and suggest an even more extreme position along the same path.  This process, perhaps counterintuitively, led the subject to subsequently express much more conciliatory views than they had previously expressed.  Importantly, these new conciliatory views seem to remain with the subject as a new set of beliefs or opinions.

While it is difficult to extrapolate this process to an everyday approach, it certainly highlights that aggressive condemnations of other people’s opinions don’t change minds.  But starting with understanding, starting by trying to recognise where we might agree with someone or, at least, sympathise (even if it’s only with their fear), is the first step to bringing someone along a new and different path, bringing your staff with you.

So perhaps the time to practice this “active listening” skill is with the family – see if by listening to others, they start listening to you!

Other Sources of good information: